Assessing the Effects of Some Structural Measures in Slovenia

According to IMAD analyses, structural imbalances in Slovenia have been accumulating for several years, impeding economic recovery and, in particular, the achievement of lasting and stable economic growth and long-term fiscal sustainability.

We have based the identification of main challenges to economic policy in Slovenia on the Development Report  and Economic issues,  our annual publications. In these reports we regularly analyse the main factors affecting Slovenia’s long-term development using a broad set of indicators. According to them, the key structural imbalances in Slovenia include low productivity of the economy, low activity of some population groups, inadequate adjustment to demographic changes, persistently high structural public deficit and high general government debt. Difficulties in these areas, which are closely interlinked, are assessed to be the key reason for the weakness of the current economic recovery. Because of their structural nature, they also dampen the long-term growth potential and undermine the long-term sustainability of public finance. 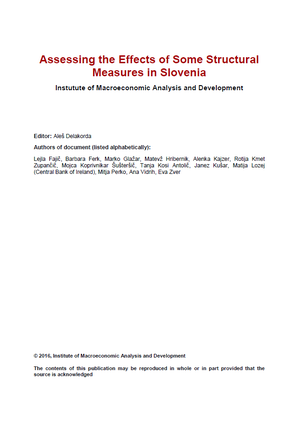 In view of the gradual economic recovery, we estimate that the time is ripe for Slovenia to implement a set of comprehensive structural reforms. In times of deep recession, structural measures were more difficult to introduce, given that economic policy makers were focused on short-term counter-cyclical measures and because of strong economic and political instability. The factors that are now making it easier for Slovenia to implement structural reforms include (i) the recovery of economic activity, which is, at least partly, also based on domestic demand; (ii) elimination of uncertainties related to the banking system stabilisation; (iii) favourable pricing terms of funding; and (iv) political stability. In such an environment economic policy has some leeway in designing and implementing measures that are usually easier to carry out in the first half of the political cycle.

This analysis presents simulations of selected measures that address the key challenges for Slovenia. They have been selected on the basis of various criteria, the most important ones being their ability to improve the situation in targeted areas, the empirically supported effectiveness of measures in other countries, and their acceptability with regard to other imbalances in the economy or to their impact on the well-being of the entire economy. The choice of the simulated measures was also conditional on the limitations of models used. In contrast to measures that have been most frequently used in the recent period, the simulated measures are to the greatest extent possible intended to remedy multiple problems at the same time rather than addressing only one area. To enhance the effectiveness of measures, it will be necessary to define the set of measures and list them by priority, as a too broad set can reduce the focus on measures of prime importance. The credibility and the speed of implementation also favourably impact the effectiveness of the reform programme, particularly in the short and medium term.

Presentations from the event: Why Slovenia should embark on structural reforms - Assessing the effects of some measures

- Tomaž Košak, Bank of Slovenia: The role of banks in the economic recovery