Spring forecast: Economic growth expected to strengthen to 3.6% this year

The Spring Forecast envisages GDP growth strengthening to 3.6% this year and then hovering around 3% in 2018 and 2019. Favourable labour market trends will persist, but towards the end of the forecasting period they will be increasingly characterised by demographic change. After last year’s strongest growth of the average wage in five years, we expect its further strengthening in 2017–2019. Inflation will strengthen to around 2% this year particularly owing to higher energy prices; amid a gradual increase in core inflation, it will remain at similar levels in the next two years. The risks to the central scenario of the Spring Forecast, which arise from the international environment, are mainly negative; in the domestic environment, upside risks predominate. 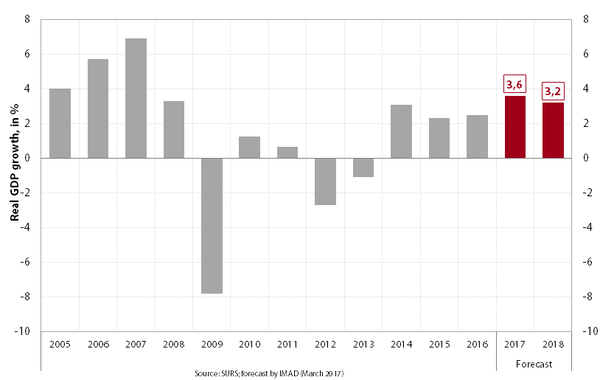 The Spring Forecast assumes a continuation of stable economic conditions internationally, favourable economic developments in Slovenia and implementation of the announced economic policy. International institutions expect a continuation of last year’s rates of GDP growth in most of Slovenia’s main trading partners. Our forecast for the domestic environment assumes implementation of planned economic policies. With the improvement in the banking system situation and a broadening of sources of finance for the corporate sector, financial limitations to growth are assumed to diminish further over the forecast horizon. All this will support further growth of Slovenia’s economy, which has strengthened in the last year and become more broad-based.

The Spring Forecast envisages GDP growth strengthening to 3.6% this year and then hovering around 3% in 2018 and 2019. The drivers of 2017 growth remain similar to those last year; the acceleration relative to 2016 will mainly reflect the dynamics of government investment. Exports will remain the key driver of economic activity over the entire 2017–2019 period. They will continue to be boosted not only by growth in foreign demand but also competitiveness gains in the tradable sector. The contribution of domestic consumption will continue to rise. Household consumption is thus expected to increase further this year amid growth in all key disposable income components and a high level of consumer confidence. Positive developments will also continue over the next two years. With rising demand and favourable conditions for investment throughout the forecasting period, we project further growth in investment in machinery and equipment and, with the recovery in the real estate market, a gradual rebound in housing investment. In line with the government’s plan for the absorption of EU funds from the new financial perspective, government investment will also increase after the sharp fall in 2016, and this will constitute the key change in total investment activity, which is set to pick up this year. Government consumption will also continue to rise, but at a lower rate than in the previous two years.

Favourable labour market trends will persist, but towards the end of the forecasting period they will be increasingly characterised by demographic change. After the strong growth in employment in 2016, a similar increase (2.2%) is expected this year, amid a further strengthening of economic growth. A continuation of favourable trends is also suggested by the indicators of expected employment, which have reached the highest levels since the onset of the crisis across all private sector activities. Unemployment will consequently also drop further, with the number of unemployed falling to 90,000 for the year as a whole. Towards the end of the forecasting period, labour market conditions will be increasingly affected by demographic change, particularly the contraction of the working-age population.

After last year’s strongest growth of the average wage in five years, we expect its further strengthening in 2017–2019. The acceleration of the nominal growth of the average gross wage in the private sector will arise from higher GDP growth and a further fall in unemployment. This fall is also related to companies' difficulties in finding skilled workers, a problem that will add further pressure on wage growth. Wage growth is nevertheless expected to remain in line with productivity growth, as wage formation in the private sector (the tradable sector in particular) will continue to reflect companies’ efforts to maintain competitiveness. The general government sector will see higher wage growth than last year owing to the lifting of the freeze on promotions, the return of the pay scale and the pay rises agreed.

Inflation will strengthen to around 2% this year particularly owing to higher energy prices; amid a gradual increase in core inflation, it will remain at similar levels in the next two years. This year’s higher growth of consumer prices will be mainly related to the prices of energy, which will be significantly higher than last year after falling for a long period. Reflecting higher growth in domestic demand, core inflation will also be rising over the entire forecast horizon, with further price growth expected particularly for services. Price rises in non-energy goods will be more moderate and more gradual, as commodity shocks are predicted to be passed on to final consumer prices with a delay.

The current account surplus will narrow this year and remain at similar, albeit still high, levels in the next two years. The main reason why the current account surplus will remain sizeable is the still low level of gross fixed capital formation. The expected pick-up in domestic consumption will otherwise boost the growth of imports, but the favourable export trends are also set to continue with the improvement in competitiveness in recent years. The narrowing of the total surplus in 2017 to 4.6% of GDP will be mainly affected by price factors owing to oil and other commodity price rises after four years of favourable trends. The impact of the increased volume of domestic consumption and goods imports will be significantly smaller; similar developments will also be seen in the next two years, for which unchanged terms of trade are assumed. In services trade, the surplus is expected to rise further, particularly in travel and transport services. In other flows we expect increasing net outflows abroad. The narrowing of the current account surplus will mainly be due to higher capital expenditure (higher net outflows of income from direct investment equity and net payments of interest on external debt) and, to a lesser extent, the expected higher payments into the EU budget.

Estimates based on the Spring Forecast indicate that in the next few years Slovenia will move into slightly positive output gap territory amid the still weak growth of potential GDP. A more than ten-year period of relatively low potential GDP growth is indicative of the long-term effect of the crisis. Growth has otherwise been picking up gradually and is estimated to total around 2.5% at the end of this decade, which is still significantly lower than before the crisis. This is mainly attributable to the low contribution of capital amid the still low level of gross fixed capital formation, which will remain significantly below the pre-crisis level at the end of the forecasting period despite the expected growth in the coming years. The contribution of total factor productivity will also be smaller than before the crisis; it has otherwise been rising the fastest and contributes the most to the higher growth of potential GDP. Owing to the expected rises in employment rates, the contribution of labour will be positive too, despite the decline in the working-age population.

The risks to the central scenario of the Spring Forecast, which arise from the international environment, are mainly negative; in the domestic environment, upside risks predominate. The risks associated with the international environment are mainly related to the high level of political uncertainty, but these risks were not reflected in the indicators of activity and confidence at the time the forecast was prepared. The uncertainty is linked primarily to the framework for the future functioning of the EU in connection with Brexit and the outcome of elections in some of Slovenia's main trading partners, and the new US administration’s policy measures. The risks in the domestic environment are mainly related to the dynamics of investment. With a revival in lending and an even lower level of uncertainty in the business environment, private investment could be higher than under the baseline scenario. Government investment in 2017 could be lower than forecast, with different dynamics of EU funds absorption than planned. Household consumption could also be higher than assumed under the baseline scenario, especially if disposable income were to increase even more as a result of even more favourable developments on the labour market.