With the easing of economic activity in the international environment, GDP growth will gradually slow this year (3.4%) and in the next two (3.1% and 2.8%); the importance of domestic consumption will increase, while exports will contribute less to economic growth. The growth of exports will continue to moderate mainly on account of slower GDP growth in Slovenia’s trading partners. The growth of private consumption will accelerate somewhat this year amid the continuation of favourable labour market conditions, and gradually slow thereafter amid lower growth in employment. These are the key findings of the Spring Forecast of Economic Trends, presented by the Institute of Macroeconomic Analysis and Development today.

With the easing of economic activity in the international environment, GDP growth will gradually slow this year (3.4%) and in the next two (3.1% and 2.8%); the importance of domestic consumption will increase. Economic growth will continue in 2019–2021, marked by two trends that started last year: the slowdown of economic growth and the changing of its structure towards a larger contribution of domestic consumption and a smaller contribution of exports. Export growth will ease further over the forecast period (largely on account of slower GDP growth in Slovenia’s trading partners), with the exception of 2020, when it will be slightly higher owing to more working days. Growth in private consumption will accelerate somewhat this year amid the continuation of favourable labour market conditions, and gradually slow thereafter amid lower growth in employment. The still strong growth of investment will also ease somewhat, especially in the machinery and equipment segment, owing to slower growth in foreign demand. Vigorous growth in construction investment will continue, partly also on account of the increased absorption of EU funds. As the slowdown of import growth will be less pronounced owing to relatively robust domestic consumption, the contribution of international trade to GDP growth will be slightly negative. The moderation of economic growth will be somewhat faster than predicted in the autumn forecast, primarily owing to less favourable developments internationally. 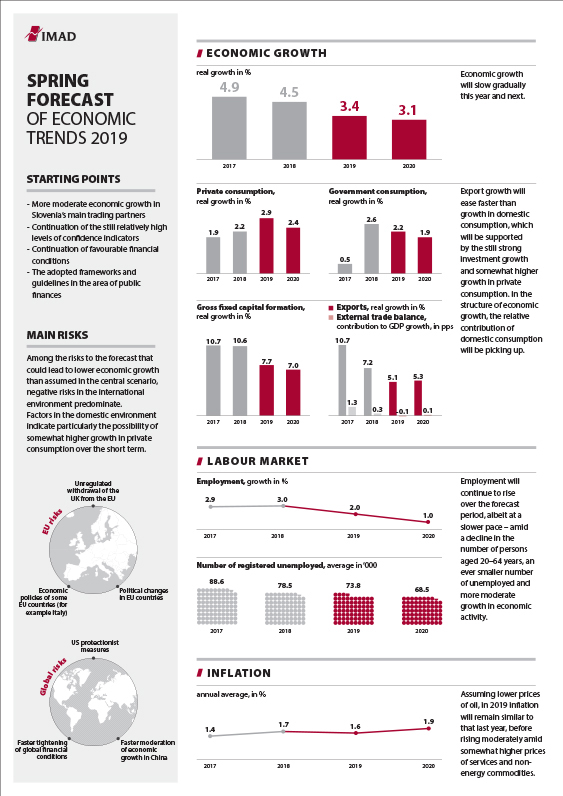 Export growth will continue to moderate particularly this year and will be lower than import growth over the forecast period; the current account surplus will be down somewhat relative to GDP, though still around 6%. The easing of export growth, especially this year, will be a consequence of a pronounced deceleration of import growth in Slovenia’s trading partners and the absence of one-off domestic factors, which had a favourable impact on growth in the previous two years. Rising labour costs will also be gradually weighing on export growth through deterioration in export competitiveness. Import growth will ease more slowly than the growth of exports, as it will be underpinned by further growth in domestic consumption. The contribution of net exports to GDP growth will be slightly negative. The narrowing of the trade surplus in goods, together with the increase in the deficit of primary and secondary incomes, will reduce slightly the current account surplus as a share of GDP in 2019–2021, but it will remain around 6%. The trade surplus in services will continue to rise.

Private consumption growth will strengthen this year under the impact of higher growth in household disposable income, before slowing in the next two years due to a gradual deceleration of employment growth. This year’s stronger growth of private consumption will be underpinned by accelerated growth in earnings and social transfers and a continuation of relatively robust growth in employment. Household consumption growth will be somewhat lower over the next two years primarily on account of more moderate growth in disposable income amid lower growth in employment. Employment will thus continue to rise over the forecast period, albeit more and more slowly amid a contraction in the number of working-age people, lower and lower unemployment and more moderate growth in economic activity. The impact of demographic trends on the decline in labour supply will be mitigated slightly by the expected gradual strengthening of net migration inflows and the increase in the labour market participation rate. Wage growth will strengthen particularly this year and also, slightly, in the next two, affected not only by the shrinking labour market, but also agreements with the public sector trade unions and legislative changes.

Investment growth will remain relatively robust in 2019–2021. Construction investment will continue to rise at the fastest pace. The growth of investment in civil-engineering works will continue, boosted by other public projects and the absorption of EU funds. Investment in commercial buildings will also grow further, driven by relatively rapid growth in the service sector. Growth in residential investment, whose volume is still low, will pick up. With high capacity utilisation, investment in machinery and equipment will also continue to increase, albeit at a more moderate rate owing to the slowdown of economic activity in the international environment and increased uncertainty.

The growth of final government consumption will decline. The gradual slowdown of growth in the 2019–2021 period following last year’s increase will be mainly related to lower employment growth amid the shortage of an appropriately skilled workforce in some sectors and lower expenditure on goods and services.

Inflation will remain moderate, amid somewhat higher growth in prices of services and non-energy commodities. A gradual strengthening of price pressures will influence inflation, but it will remain similar to that in 2018 this year amid the assumed lower prices of oil. In the next two years inflation will rise moderately (around 2%). This year we expect a further strengthening of price growth particularly in the service segment, while in the next two years a more pronounced increase is also expected for non-energy industrial goods.

Among the risks that could lead to different economic growth than forecast in the central scenario, negative risks in the international environment predominate. In circumstances of significant uncertainties, downside risks are associated with risks in the global and European economic environment, which have heightened somewhat since the time of the autumn forecast. Global risks are mainly related to: i) a possible intensification of US protectionist measures and retaliatory counter-measures by its trading partners, ii) a faster easing of economic growth in China than predicted by international institutions, and iii) a faster-than-expected tightening of global financial conditions. In Europe, risks are related to the uncertainty about the time and manner of the UK’s withdrawal from the EU and their economic relations in the future (the risk of an unregulated or a so-called hard Brexit), economic policies of some countries (for example, Italy) and – especially over the medium term – political changes. Factors in the domestic environment are largely positive and could lead to somewhat higher economic growth than in the central scenario, particularly higher private consumption in the event of the adoption of economic policy measures (for example, in the area of pensions, wages or tax policy) that would mean higher growth in household disposable income.