In the weeks ahead key orientations of wage policy will be formed both in the private and, indeed, particularly in the public sector. Pressures on wage growth have strengthened in the last quarter for several reasons. The unemployment rate is gradually approaching its long-term equilibrium and firms are finding it increasingly difficult to find appropriately skilled workforce. In the public sector, several years of wage containment followed by selective wage rises for only a few groups strengthened the demand for higher wages; this points primarily to the uncertainty of wage policy and the absence of a systematic approach to its formulation.

At the Institute for Macroeconomic Analysis and Development, we would like to contribute to the formulation of appropriate wage policy, especially in the public sector, with our analyses and discussion. To this end we organised a discussion with experts on Tuesday, 16 October 2018.

The discussion was divided into two sessions:

In the first session, Boštjan Vasle, Acting Director of IMAD, presented the conclusions of our analysis on public and private sector wages, including an estimation of the impact of wage growth in one sector on the other and the differences between the two sectors’ average wages, the wage gaps for comparable occupations having been rising further in recent months.

The presentation was followed by a roundtable discussion featuring:

Anže Burger, economist from the Faculty of Social Sciences in Ljubljana, who discussed wage policy as part of a broader macroeconomic environment; Tomaž Vesel, President of the Court of Audit of the Republic of Slovenia, who talked about the advantages and limitations he faces as a public sector employer and the ways some employers are attempting to ensure stimulative pay; Aleksander Zalaznik, General Manager of Danfoss Trata and President of the Managers’ Association, who presented examples of good practice in seeking and remunerating good workers in the private sector; Sonja Šmuc, General Director of the Chamber of Commerce and Industry of Slovenia, who offered her experiences and opinion on this topic; andBoštjan Vasle, from IMAD, who talked about public wage policy orientations thus far and in the future. 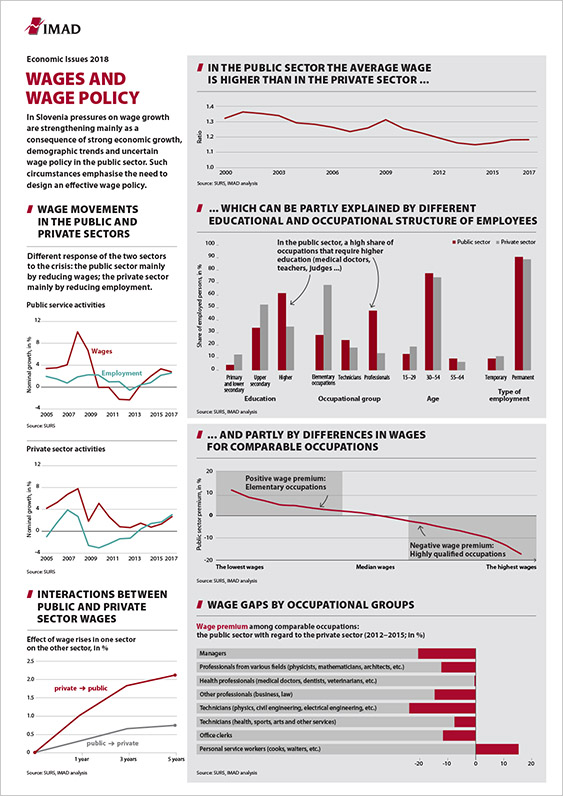