Summer forecast 2020: This year a strong economic decline; the pace of recovery will depend on the epidemiological situation and the combination of economic policy measures

The COVID-19 epidemic, in combination with stringent health protection and containment measures, represents a significant negative shock to economic activity, which will contract strongly this year. The depth of the GDP decline and the dynamics of the recovery are (and will be) crucially dependent on the epidemiological situation and the scope and content of economic policy measures. In the baseline scenario of the summer forecast, IMAD predicts a 7.6% decline in GDP this year and 4.5% growth in 2021. Most activities will not yet reach the levels seen before the outbreak of the epidemic. As the virus is still present and some restrictions remain in place, the recovery will be gradual and uneven across activities. Uncertainty and the risks of an even sharper decline in GDP linked to possible recurrences of major outbreaks of the epidemic remain high. The reinstatement of stringent measures to stem the spread of the coronavirus could lead to an even deeper decline in GDP. However, if a vaccine or a medicine is developed and made available soon, or if the spread of the virus is effectively and more permanently contained, activity could recover faster than predicted in the baseline scenario.

For the needs of outlining a revised state budget, IMAD has updated its forecast of economic trends, as stipulated by Article 11 of the Intervention Measures in the Fiscal Area Act adopted on 20 March 2020. The forecast takes into account the most recent forecasts by international institutions for Slovenia’s trading partners (published by 10 June), the available data on current economic developments and the adopted economic policy measures.

The prospects for economic growth in main trading partners have deteriorated strongly since mid-March, a recession of historic proportions being expected in the majority of countries this year. The forecasts by international institutions for Slovenia’s trading partners mostly assume gradual economic recovery after the first wave of the epidemic is contained, which will be most pronounced in manufacturing and more gradual in activities related to tourism. As the virus is still present and some containment measures remain in place, the baseline scenario for the international environment assumes no rapid rebound to the levels before the outbreak of the epidemic.

In the Summer Forecast for 2020 and 2021, which was prepared in the first half of June, we assume a gradual recovery of the economy in the second half of the year, after a sharp decline in the first and especially the second quarter. However, as the virus is still present and some restrictions have remained in place, the recovery will be gradual and uneven across activities. “For this year, we thus expect a 7.6% decline in GDP, which will be followed by renewed growth in 2021, but GDP will remain below the pre-epidemic level in most activities,” Maja Bednaš, Director of IMAD, pointed out.

This year’s decline in GDP will arise from a fall in value added in many sectors. Value added is set to decline the most in accommodation and food service activities, arts, entertainment and recreation, personal service activities and transportation. A somewhat smaller, yet still significant, fall is expected in manufacturing. A fall in demand and disruptions in supply chains due to containment measures at home and abroad will also contribute to a sharp decline in exports and imports. With high uncertainty, which is affecting investment decisions, investment will also fall markedly, particularly in machinery and equipment. Owing to restricted movement and limited supply during the epidemic and increased uncertainty, we also expect a strong decline in private consumption this year, although total disposable income will remain similar to that last year due to the government’s support measures. Government consumption will strengthen temporarily in crisis conditions.

The deteriorated economic conditions are also affecting the labour market. The negative impacts are mitigated by intervention measures, but cannot be completely prevented. For this year we therefore expect a fall in employment and strong growth in unemployment. With a gradual recovery of economic activity, the deterioration in labour market conditions will slow down. “However, under the assumptions in the baseline scenario, the labour market may not recover before next year,” Maja Bednaš stressed. 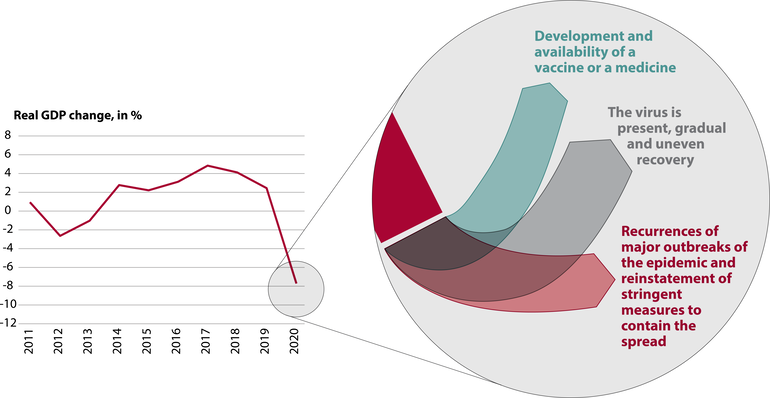 Uncertainty and the risks of an even sharper decline in GDP associated with possible recurrences of major outbreaks of the epidemic remain high. A new and more intense outbreak would lead to the reinstatement of stringent measures to contain its spread, which in turn would again severely hamper business operations in service sectors and industry. “If this happens this year, GDP would fall by two to three percentage points more, and bankruptcies and increased unemployment would also contribute to a slower recovery next year,” said Maja Bednaš, but ended on a more positive note: “If a vaccine or a medicine is developed and made available soon, or if the spread of the virus is effectively and more permanently contained, activity could recover faster than predicted in the baseline scenario.”