Assessment of the economic situation

It is clear that the COVID-19 epidemic will have significant economic consequences and that GDP will decline noticeably this year. The depth of the decline is crucially dependent on the further development of the epidemic and its duration, which is currently a great unknown according to the prevailing opinion among epidemiologists. A longer-lasting stabilisation of economic conditions is unlikely to be achieved before the development and widespread use of a vaccine.

Since the Spring Forecast of Economic Trends 2020 was published (12 March 2020), the situation has changed substantially. At the beginning of March, the impacts of supply chain disruptions on manufacturing activity were still at the forefront from the aspect of the consequences for economic activity, and, particularly a global decline in tourist travel and hampered or interrupted transport routes. However, the outbreak of the epidemic in the neighbouring Italy and its spread to other European countries have already required urgent and comprehensive measures to protect health and people in Slovenia and most EU countries since the middle of March, and these measures are significantly affecting economic activity. Even if we assume that the current aggravated situation and the severe disruption of production and service sector activities last at least two months, we can expect gross domestic product to decline by more than 5%. Taking into account this assumption, our estimates currently range between –6 and –8%.

It is clear that the consequences will be significant and that GDP will therefore decline this year. The depth of the decline will crucially depend on the further development of the epidemic’s spread and its duration, which, according to the prevailing opinion among epidemiologists, is currently a great unknown. A more lasting stabilisation of economic conditions is unlikely to be achieved before the development and widespread use of a vaccine. 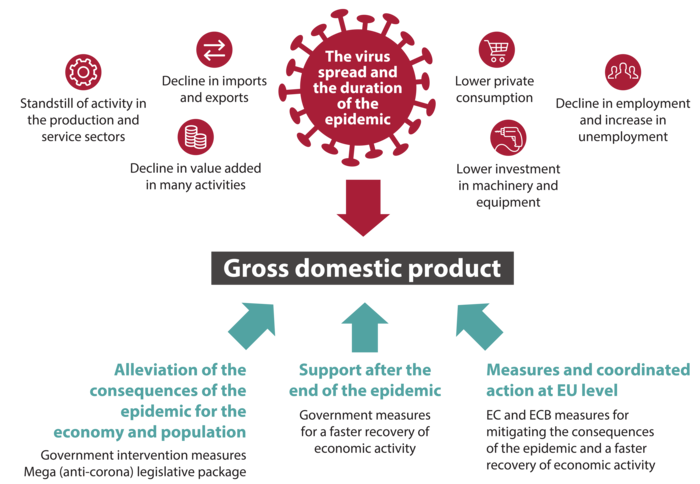 Even if we assume that the current aggravated situation and the severely hampered activities in the production and service sectors do not last longer than two months (before gradually returning to the level before the outbreak of the epidemic), gross domestic product is expected to fall by more than 5%. Based on this assumption, our estimates currently range between –6 and –8%. In the most exposed sectors, such as accommodation, catering and personal services and the sale of non-food products, significant revenue losses and possibly a decline in value added of up to 70% or more are expected during the period of the strict protection measures. In industry, trade, transport and some business services, the decline in orders and the disruption of trade routes and supply chains during this period are likely to reduce value added by at least half. In some sectors the decline will probably be less severe (for example, the energy sector), in some the impact will be minimal (agriculture), while in some others activity is even expected to increase as a result of the current situation (some telecommunication services).

If the case of a prolonged period of severely paralysed economic activity, which (unfortunately) is an increasingly likely assumption, the impacts will be more profound and far-reaching. Some companies will not be able to operate, the number of bankruptcies will increase and the consequences will also be felt on the labour market. We could even see a double-digit fall in GDP this year. Recovery after the epidemic is contained will also be slower. The key role will be played by measures. An absolute priority is to take measures to support the functioning of the health system and to provide all the necessary protective equipment and devices. From the economic aspect, immediate emergency measures to alleviate the consequences of the spreading epidemic are first needed to help businesses and the population to bridge liquidity problems due to revenue losses and to ensure the greatest possible protection of jobs, while later on measures to boost the economy will be required.

At IMAD we are monitoring the situation and measures for alleviating the economic implications of the coronavirus epidemic in Slovenia and its most important trading partners. We will provide a full and comprehensive update of the forecast after the expiry of the protection measures according to Article 11 of the Act Determining Intervention Measures in Public Finance adopted on 20 March 2020.

In the following paragraphs we provide an overview of the latest forecasts for the EU and main trading partners.

The COVID-19 pandemic, which started in China and has recently spread to Italy and other EU countries, including Slovenia, in combination with strict containment measures, represents a significant negative shock for economic activity in the euro area. The slowdown in economic activity in China and other affected countries already disrupted global supply chains and hampered euro area exports in the first months of this year. In January 2020 (the most recent data available), total EU-27 exports outside the EU were otherwise slightly higher year on year, while exports to China were more than 6% lower.* The measures enforced in many European countries to contain the virus spread have already affected or will additionally affect euro area economies. The recent steep falls in global stock markets and a strong decline in oil prices additionally reduced consumer and business confidence in the economy. The severe containment measures introduced in several European countries in the last two weeks have a negative impact on the supply side of the economy. At the same time, they also have significant negative consequences for demand, particularly in sectors such as tourism, transport, recreational and cultural services and some manufacturing activities.

The prospects for economic growth in Slovenia’s main trading partners have deteriorated strongly in the last two weeks and are accompanied by very high uncertainty. As the extent of the coronavirus spread and the related containment and economic policy measures are not yet fully known, the negative consequences of COVID-19 are difficult to assess. The forecasts for trading partners released by March (see the table) mostly assume that the virus spread is mainly limited to China and that it is contained by the end of the first quarter, while more recent forecasts take into account the virus spread across Europe and at the same time assume a relatively rapid stabilisation of the situation (in the second half of this year). The forecasts published after the release of IMAD’s Spring Forecast also take into account some strict measures for containing the virus spread and predict stronger negative impacts on economic activity. All forecasts are however subject to (pronounced) negative risks, some of which have already partly materialised.

With the situation tightening further, the scenarios of the forecasts of various institutions, which were the most pessimistic until the previous week, are currently the most likely or already too optimistic. For example, in its forecast released on March 12, the ECB predicted a 0.6% decline in euro area GDP for this year in the most pessimistic scenario. According to the latest information, a 5% GDP decline is stated as the most realistic scenario for the euro area. On 23 March 2020 the German Ifo Institute released projections on the impacts of the coronavirus and containment measures on the German economy, which could reduce GDP growth in Germany by 7.2 to 20.6 percentage points this year (depending on the duration of the restrictions on the movement of people and the functioning of the economy). At the same time, it pointed out that the partial shutdown of the economy should be limited to the shortest period possible without jeopardising the fight against the epidemic. When presenting its latest economic forecast for CESEE countries, the Vienna Institute for International Economic Studies (WIIW) stressed that after a temporary slowdown the pandemic may return in several waves and that a stronger recovery of the economies can only be expected after the introduction of an appropriate vaccine. 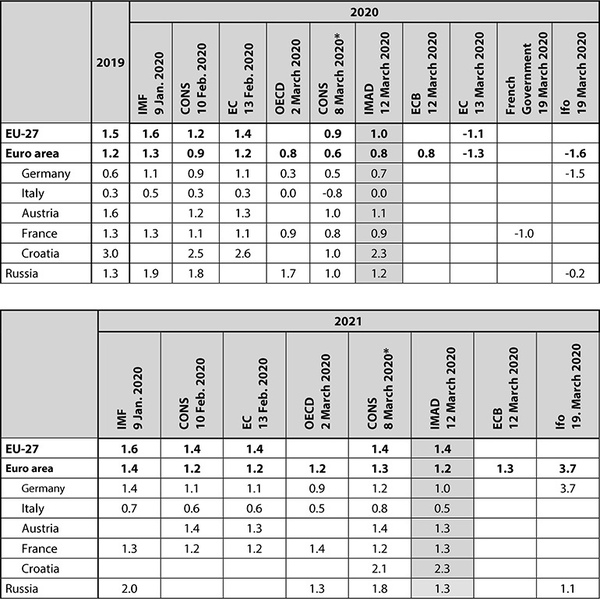 Source: CONS – Consensus economics, ECB, European Commission, Ifo Institute, IMF, Ministry of the Economy and Finance of France, OECD, IMAD estimate.
Note: The table takes into account the forecasts from the institutions’ baseline scenarios.
* The Consensus Economics forecasts for Croatia and Russia were released on 16 March 2020.