High broad-based economic growth will continue this year (5.1%); a continuation of favourable economic trends is also expected for 2019 (3.8%). Export growth, underpinned by gains in competitiveness from previous years and a favourable export structure, is expected to remain high in 2018 and subsequent years. Domestic consumption will remain a significant factor of growth in 2018–2020. The growth of employment will remain fairly high this year, before easing gradually in the next two years, mainly under the impact of demographic change.

High broad-based economic growth will continue this year (5.1%); a continuation of favourable economic trends is also expected for 2019 (3.8%). The forecast is based on the very favourable economic developments at home and internationally, and a continuation of high business and consumer expectations. The key reasons for the continuation of strong growth this year will be the still high growth of exports and investment, coupled with accelerated growth in private consumption as a result of higher growth in disposable income. In the coming years economic growth will decline slightly, mainly owing to (i) a gradual slowdown in growth of foreign demand and (ii) demographic factors, which will be reflected primarily in lower growth in employment and household consumption. 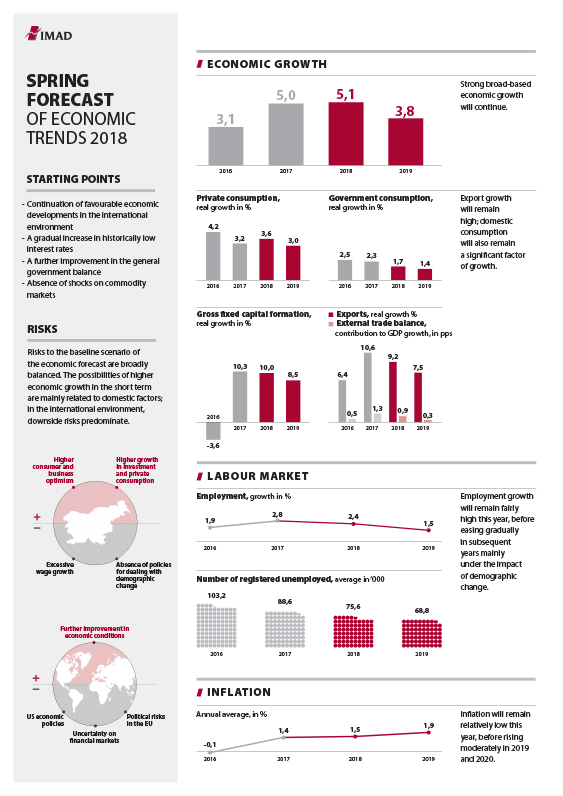 Export growth, underpinned by gains in competitiveness from previous years and a favourable export structure, is expected to remain high in 2018 and subsequent years. Particularly in 2018, the strong growth of exports will also be influenced by favourable conditions in the international environment. In the next two years, export growth will slow down, mainly in line with growth in foreign demand, according to forecasts from international institutions. In the next few years exports are also not expected to be influenced by any major one-off factors, which have significantly accelerated their growth particularly in 2017 and 2018. Over the entire period, export growth will be positively influenced by companies’ efforts to maintain competitiveness.

Domestic consumption will remain a significant factor of growth in 2018–2020. Growth in private consumption will strengthen this year under the impact of favourable labour market conditions and consumer optimism, then fall slightly in 2019 and 2020, for the most part owing to slower growth in employment. Last year’s rebound in investment, which has contracted significantly since the onset of the crisis, will continue. A strengthening is expected for all segments of investment activity, not only in construction (housing and infrastructure investments), but also in investment in machinery and equipment; amid rising demand, this will continue to be boosted by high capacity utilisation and good business performance. The growth of government consumption will remain relatively low.

The growth of employment will remain fairly high this year, before easing gradually in the next two years, mainly under the impact of demographic change. Over the entire period we expect further employment growth in most activities. It will however ease gradually, mainly owing to the decreasing pool of labour, in spite of a slight increase in the activity rate and the hiring of foreign nationals. The number of registered unemployed will continue to fall. Amid the expected growth in economic activity and employment, this will also be due to demographic factors (hiring to replace the rising number of retirees, outflows from unemployment into retirement).

Wage growth is expected to remain in line with the expected growth of productivity. A further decline in unemployment and increasing labour shortages (for skilled labour in particular) will gradually exert upward pressure on wage growth. Wage growth is nevertheless expected to remain in line with productivity growth, as wage formation in the private sector (the tradable sector in particular) will continue to reflect companies’ efforts to maintain competitiveness. In the general government, wage growth will remain high this year and next, given the agreements between the social partners.

Inflation will remain relatively low this year (1.5%), before rising moderately in the next two years (to just above 2%). Last year it rose slightly, following a period of very low price growth/deflation, and similar movements are also expected this year. This will mainly be due to the relatively low prices of commodities. Under the impact of high economic growth and, in particular, private consumption, core inflation will already exceed 2% this year.

The surplus of the current account of the balance of payments will remain very high in 2018-2020 (around 7% of GDP). In addition to the extensive deleveraging and a gradual improvement of business performance in recent years, this is mainly attributable to stronger saving amid the still relatively low level of investment. The surplus is also influenced by the movement of commodity prices, which have been relatively low for several years. The high current account surplus in 2018 and the next two years will reflect the continuation of strong growth in exports, which will continue to be boosted by higher foreign demand and the relatively favourable competitive position of the Slovenian economy, where no major changes are expected in 2018 and 2019. Almost two thirds of the increase of the trade surplus in merchandise will be due to quantity factors and over a third to favourable export-import price trends (terms of trade).

The estimates of the output gap based on the Spring Forecast show that Slovenia will be high in the positive phase of the economic cycle in 2018–2020. This is also indicated by some other indicators such as labour shortages, historically high capacity utilisation and property prices. However, the estimate of the cyclical position of the economy on the basis of financial and price indicators points to lower maturity of the upward phase of the economic cycle (inflation, wage growth, low volume of corporate loans, high current account surplus), where positive trends have started to strengthen only recently.

At the time of preparing the Spring Forecast, the risks to the baseline scenario of the economic forecast are broadly balanced. Upside risks to the short-term forecast of economic growth mostly come from the domestic environment. This is indicated particularly by high consumer and business confidence, which – amid the continuation of favourable borrowing conditions and positive external developments – could lead to even higher growth in investment and private consumption. Towards the end of the forecasting period there is a greater uncertainty about the policy measures for dealing with demographic change, which will affect the dynamics of economic growth, the wellbeing of the population and fiscal sustainability in the future. In the international environment, downside risks predominate. In the currently very favourable cyclical economic conditions, they are mainly associated with i) the consequences of the tightening of monetary policy in the US and, in the medium term, also in the euro area; ii) protectionist measures and the unpredictability of economic measures in the US in general; iii) high valuation of assets on financial markets (especially in the US); iii) in the EU, with the outcome of Brexit negotiations; iv) political changes in EU Member States which could affect economic policies in the entire European territory; v) global geopolitical tensions.